Andrew Phillip Dron and Isabella (Anderson) Dron were my great grandparents. Alexander (who was Andrew's father) died in 1870 in Glasgow, Scotland.

John Anderson, who was Isabella's father, was working for a Scottish group who invested in the Longfellow mine.

I have information on all the people you mention. Andrew and Isabella both died in Berkeley, ca. in the 1940's.

John Anderson died in Big Oak Flat, ca in 1915. He is buried in the Divide Cemetery by the tombstone of Edmund Anderson who was his nephew. 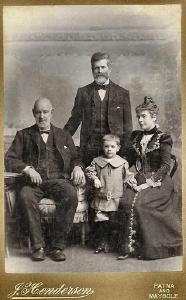 9.Isabella Stewart4 Anderson (Josephine3 McCallum, Isabella2 Stewart, John1) was born May 1, 1866 in Campbelltown, Scotland, and died November 12, 1949 in Berkeley,California.She married Andrew Philip Dron Sr. July 5, 1892 in 28 Cassillis Road,Maybole,Scotland, son of Alexander Dron and Annie Wilson.He was born February 6, 1867 in Glasgow, Scotland, and died April 6, 1942 in Berkeley,California.
Notes for Andrew Philip Dron Sr.:
Newspaper article from 1942 on death of Andrew Philip Dron Sr.:
dead is a pedestrian identified through clippings in his pockets as Andrew P. Dron, on 2004 Yolo Ave, formerly a resident of Fresno. Dron was killed instantly just before noon today as he sought to cross the East Shore Highway at Gilman Street. He was crossing from west to east, the California Highway patrol was told, stopped, then ran into the side of a truck driven by Daniel F. Clancy, 38, of Sharp Park, near Los Angeles. The 22 Wheeled truck and trailer were northbound.
The clipping from a Fresno newspaper of December, 1939, described Dron as an engineer, Scottish born, whose hobby was art. A photograph was attached. Blue prints were found in his pockets. The family was notified by police. His death was Berkeley's fifth traffic fatality of 1942.
(I wasn't able to find a copy of clipping that was in his wallet)

Children of Isabella Anderson and Andrew Sr. are:

Notes for Andrew Philip Dron Jr:
Christmas card from Junne Dron to father before he died:
Dear Daddy,
Keep a stiff upper lip. We all are looking for forward to have you home for Xmas.Mom and I are busy wrapping presents and it won't be long until we get the tree.I'll be over to see you soon, but Susan gets kind of wiggly when she comes so she may stay home a couple of times.
All our love Gene, Junne and Susan Lee
Christmas card from Thora:
And best wishes for the Holidays and Scotty dear; my main wish is that my darling be home at Xmas and always. Sometimes one doesn't realize how much we love someone until they are away.Junne and Gene have taken the baby and gone visiting. They invited me to go but I wanted to watch Grouch Marx and also do some reading. It was nice of them to invite me.
Jay was over this after-noon and spent some time Junne. I know it helped pass the time.
Junne had the front room all pretty and neat.We had put the table in front of the window for the Xmas tree.
Paul White planted a willow tree down below.It will be nice I know.He also dug out some of out gray shrubs so the water would flow down the hill.I'm so sleepy I'm going to bed- it is ten o'clock. I woke up at five this morning so did my studying as I knew I had to leave home at 9:30 for Sausalito.
Sure hope Stuart and Dan come tomorrow. It will be so nice to see them.
It only takes a day for a letter to get up to Santa Rosa but two days to get to Fort Miley.
Good night sweet.I'll probably see you before this card reaches you.
Always Thora

M, b. 13 September 1893, d. 5 April 1973
John Anderson Dron was born on 13 September 1893 at Scotland; per 1900 census.2,3 He was the son of Andrew P. Dron and Isabella (Anderson) Dron.1 John Anderson Dron married Dorothy (Cook) Dron on 21 January 1921 at Fresno, Fresno Co., California.4,5 John Anderson Dron died on 5 April 1973 at Ojai, Ventura Co., California, at age 79; The following article first appeared in the April 11, 1973 edition of the Ojai Valley News. It is reprinted here with their permission. The photo of Major Dron was added to this article by the Ojai Valley Museum.

One of those who made Ojai, Ojai, passes away

Another part of the old Ojai of 15 plus years ago and much larger bit of my life is gone. Major John Dron has left us.

Ours was an almost instant rapport, but that was pretty average for him. He made friends easily and enemies not so easily. He had many of the former and proportionately few of the latter. You couldn’t be neutral about him, though I’ve never known a person who was more tolerant in everything except for public chicanery and avarice. Crooked politicians, corporate greed, and Babbits were his avowed, unremitting, unrelenting and implacable enemies.

The county Board of Supervisors adjourned early Tuesday
in memory of the
late John Dron, Sr.

He was classic Scot with their passion for learning; an abstract thinker with a great pendulum swing from effervescence to melancholy. When being a dour Scot “sipped his sorrer wi a long spoon,” as he was wont to say.

He opened the door to, or sent me down, many roads whose names end in “ology” — archaeology, anthropology, geology — whetting my already active curiosity in ancient engineering techniques and avenues of the literary arts never before considered. How many times have I arrived at his door with face and spirits dragging 20 feet behind to leave later willing to try again the struggle out of my personal morass.

We adventured together on short jaunts up the mountains in that jeep that was to John as was the yellow horse to D’Artagnan. Long trips — as the one when we misjudged the weather, and his ancient down sleeping bag burst in the night and mine was inadequate. The long dreary hours of the night tolled away by his sepulchral, plaintive voice querying “and what is the hour now?”

Never was I happier to see a dawn, and we did as mad a dance as his years and my infirmities would permit, ’til the sun and our little fire thawed us to merriment over our just-passed misery.

The delightful evenings spent in front of the inevitable fireplace, the night raw outside, and John reeling off vastnesses of poetry or reading philosophy, Plutarch, Henry Adams, his own letters to the great personages and their replies.

His pixie look when contemplating the deflation of some over-blown ego. The pipe with one side of the bowl burned away that took at least a box of matches per filling and the finger burned black from tamping it. His depressions, when his voice would trail off into nothingness to be followed with sighs and great groans of Scottish spiritual torment, he brought to us for surcease and went away having received it, as I did so often with him.

He gave to me that which my own father could not. A camaraderie that asked nothing but gave, expected and received all. Oh, how exasperating he could be!

Anecdotes? Our whole 15 year association was one long, loving anecdote.

The valley is less warm and less home now.

During World War I he served as a machine gun officer. In World War II he was a Captain and Major in the Corps of Engineers. During the 1920’s he became a civil engineer, working with the Nevada and California division of highways.

A resident of Ojai since 1929, he pursued a career as engineer and surveyor, serving as ex-officio engineer of the city of Ojai for many years. In 1938 he was WPA administrator for the county of Ventura.

Well known for his many and varied interests, he was active throughout his lifetime in civic affairs, serving as trustee to the Ojai Community Art Center and Ojai Civic Association. He was an expert on architecture of the Parthenon, and was often consulted for his intimate and detailed knowledge of the backcountry of the county. He will be remembered by many as the man who kept the Edison Company from putting giant electric poles across the valley mountains.

“The Major” is survived by his three children: John A. Dron, Jr., Mrs. Robert (Dorothy) Rail, and Boyd S. Dron, all of Ojai; a sister, Miss Gladys Dron of Berkeley; and six grandchildren.

7.Josephine3 McCallum (Isabella2 Stewart, John1) was born April 2, 1839 in Campbelltown, Scotland, and died Bef. 1900 in Scotland.She married John Anderson 3rd October 7, 1859 in Campbelltown, Argyll, Scotland, son of John 2nd and Margaret Aitken.He was born December 1837 in Scotland, and died October 11, 1915 in Big Oak Flat, California.
Notes for John Anderson 3rd:
Obit. from Sonora newspaper: John W. Anderson native of Scotland, aged 77, 10 months, and 5 days, died at his home in Big Oak Flat. Was a baker by occupation. Came to California 17 years ago and came immediately to Big Oak Flat where he has since continually resided. Two daughters, Mrs. Anderson and Mrs. Dron besides 3 sons. Buried cemetery on devide (Devide Cemetery)October 11, 1915. (we went there but couldn't find his marker or didn't look hard enough)

Children of Josephine McCallum and John 3rd are:

F, b. October 1835
Annie (Wilson) Dron was born in October 1835 at Scotland.1
She appeared on the census of 1900as mother in the household of Andrew P. Dron and Isabella (Anderson) Dron at Big Oak Flat, Tuolumne Co., California; Are the several McCollums from Scotland appearing on the same census page more Anderson-McCollum cousins?1